Courtneigh Cloud Bernstein opened Issy’s Coffee & Gift Shop in memory of her grandfather, Israel Gurwicz, a Holocaust survivor saved by his governess Tonia Peitryk. The shop not only honours the place of all survivors of genocide, but also the courage and kindess of all upstanders and rescuers.

Israel Gurwicz was born in Vilna to Bluma and Moshe-Hirsch. In 1941, the family was forced into the Ghetto. Issy’s brother Allan escaped and hid with Tonia Pietryk, their Polish governess. His mother and sister Deborah were murdered in the Ponary Forest. His father was murdered in Dachau. Issy escaped and found his way to Tonia’s house where he hid with his brother until their liberation by the Red Army. Tonia was later recognized as Righteous Among the Nations by Yad Vashem for her bravery. After the war Issy and Allan immigrated to South Africa. 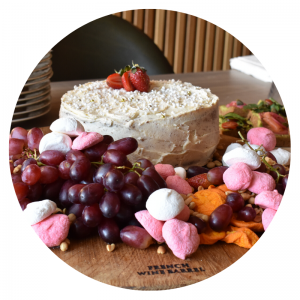